​SPANIER & BOURNE
Barry Spanier and Geoff Bourne. It was not possible to mention one name without the other; without Geoff, Barry may never have become the Barry – the Barry many have come to know and love. Certainly, the Spanier half had more to do with sail designs that pioneered the way we move; but without Bourne as his sounding board, and without Geoff keeping the operations on track to be the most viable commercial sail loft on Maui, perhaps the Neil Pryde umbrella would have never existed to propel Maui Sails into the stratos-phere. Barry left Bourne up to the business decisions, something every artist designer dreams for enablement.

Geoff keeps a very low profile, and Barry one notch above this. You can read Barry's story in ​The Bare Chronicles. In short form, Barry reveals that he was born (not Bjorn, or Bourne, but simply born) in 1946. School. Dropped out. Built a 38' sailboat in SF, sailed it to NZ, wrecked it. Went back to Maui. Spent 25 years with windsurfing. Did some good stuff.

Some of the good stuff they did was design sails for innumerable world championships and speed records with the boom in hands of the likes of Bjorn Dunkerbeck, Fred Haywood, Mark Angulo, Kevin Pritchard, Debbie Brown, Kelby Anno... the list goes on and on.

While Geoff assumedly is enjoying his golden years on Maui, Barry may have at this time already launched his second unique boat, ROSIE G – a scow bow junk rig also built in SF – and as he puts it, GTFOH. Perhaps that is shorthand for leave harbor. We hope Barry's adventures take him far, and not onto the rocks. 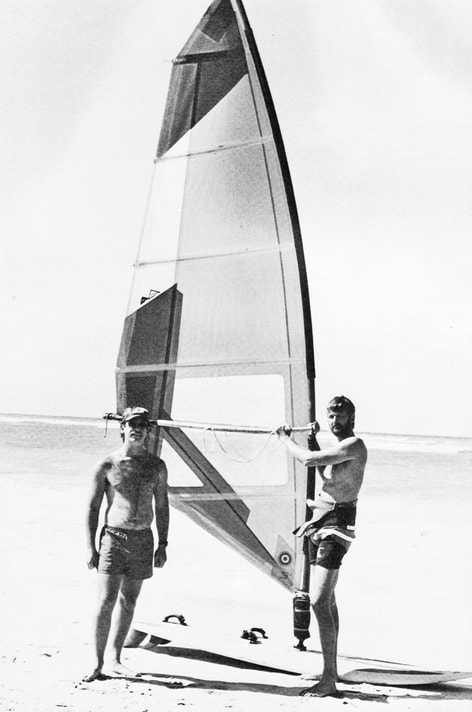 Where there was Spanier, you'd always find Bourne. 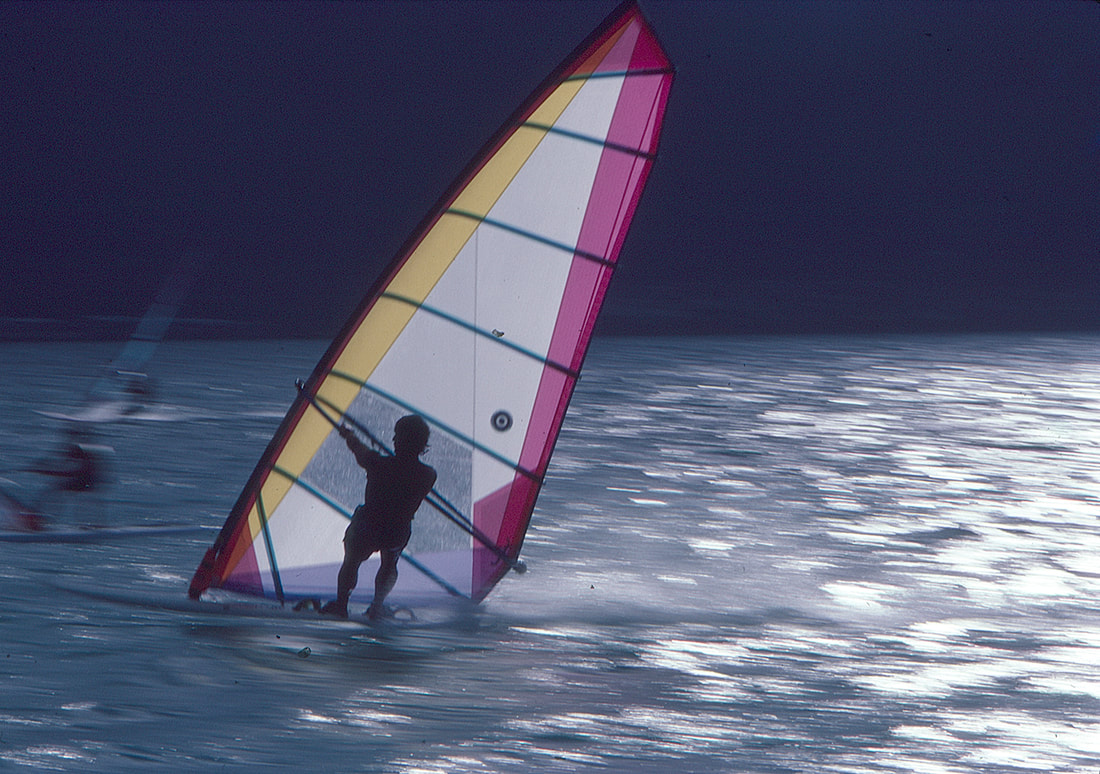 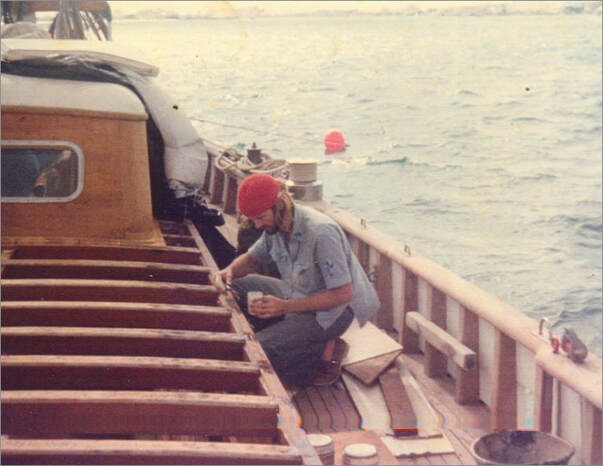 Barry says: "Geoff and I met in NZ, at a Christmas party. My boat was anchored in a cool spot nearby, the people were all partied up, the woman who invited me had another guy, it was crazy noisy, so we left and went to my boat. Before dawn we were sailing North, and have sailed together ever since. We fit together like the story says. When I was tired, he was happy to take a watch. He was skilled and experienced from years of sailing, and I immediately trusted him with the boat. After that we naturally teamed in so many ways that complimented each other. When we took over the reconstruction of a 75’ schooner, CONSTELLATIO, he ran the logistics and people, and I ran the working crew because I had the boatbuilding experience. We had more fun in those six months than should have been legal (and lots of it probably touched the edge when it came to fun)."

The slogan for Maui Sails was Not-Normal, but they became the norm, with more riders using them than any other. 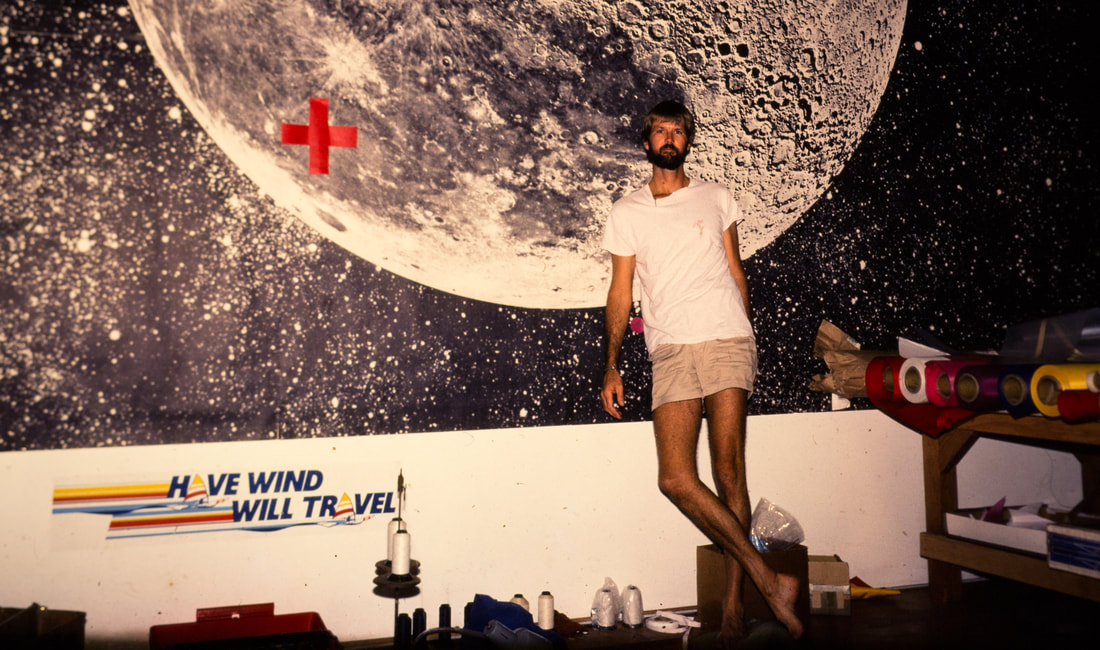 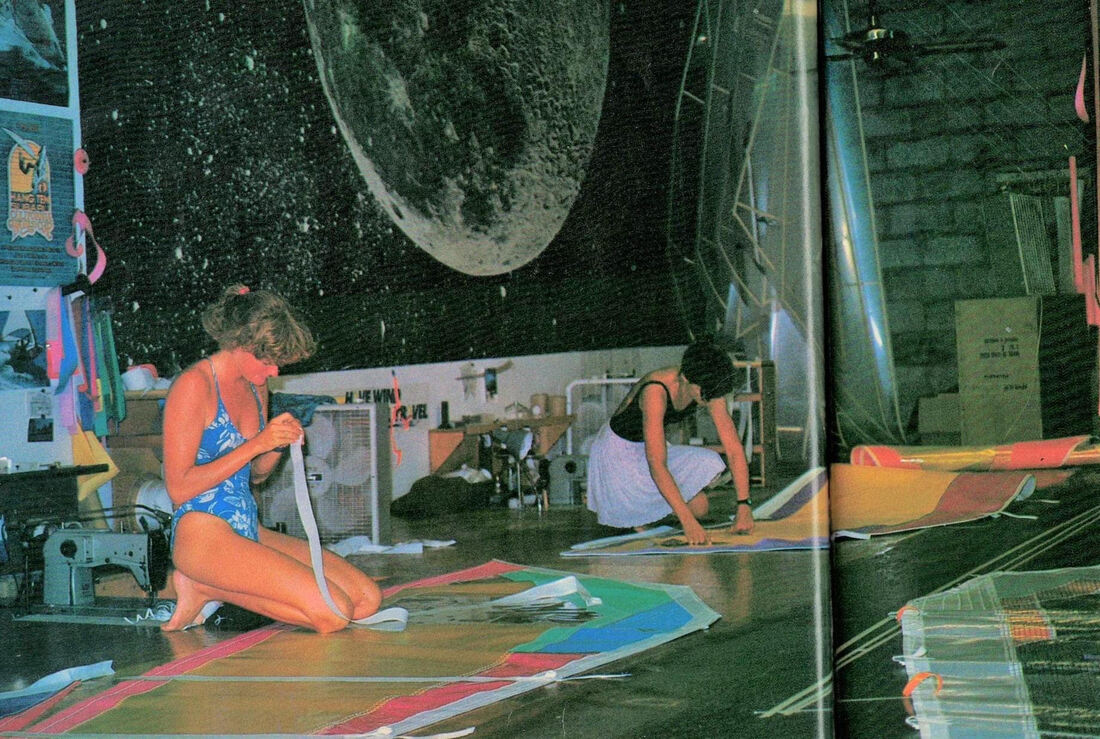 Guys were always looking for an excuse to go up in the loft to see what models were sewing. 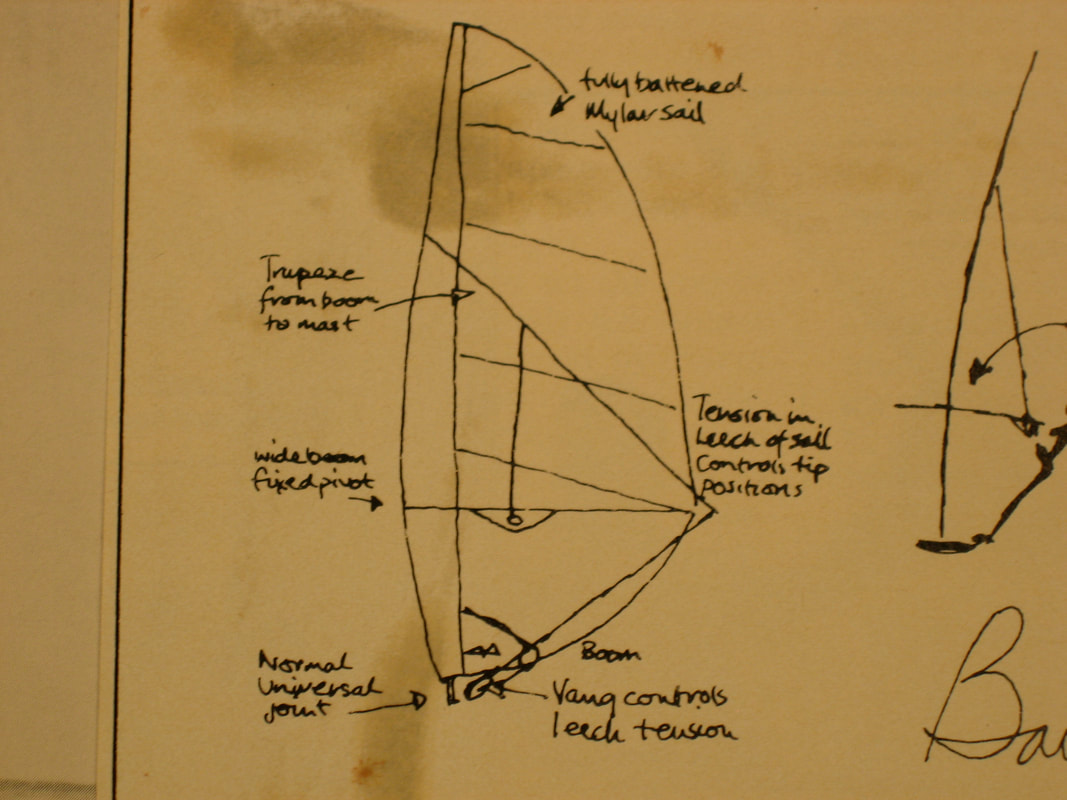 This sail, that broke the 30-knot barrier with Demetri's wing mast, was not normal. 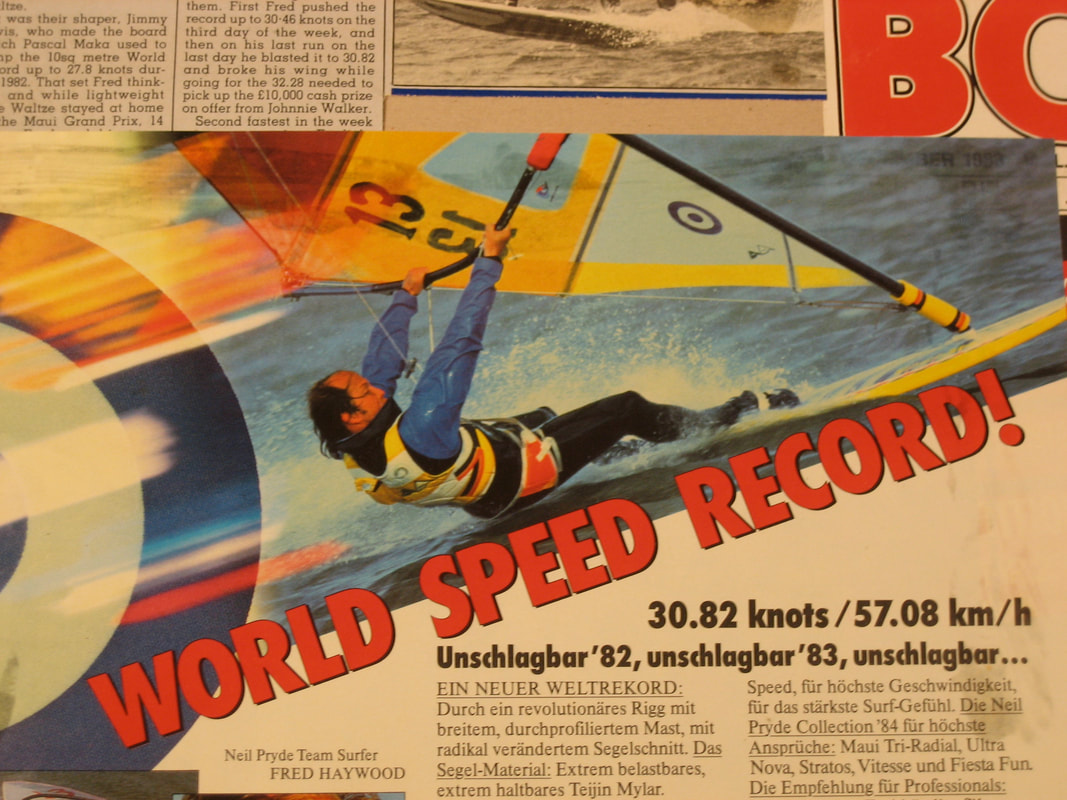 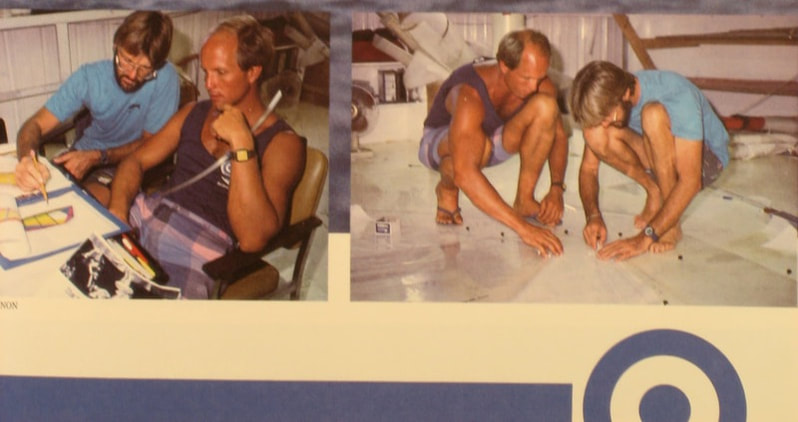 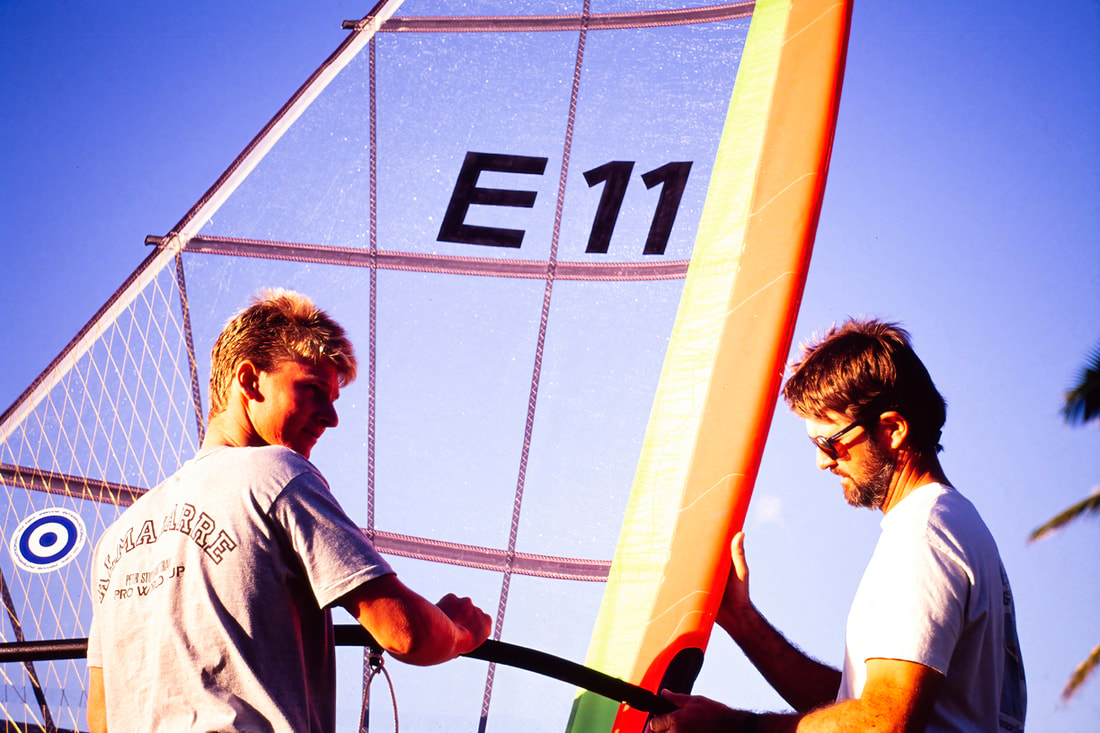