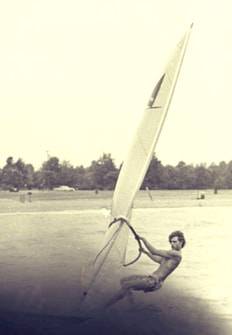 Ken Winner was masterful in the late 70s, and you can safely say he still is. Out on the racecourse, he would play Mozart on your *ss; and then when you came in beat tired, he'd be unrigged, actually playing Mozart, on the yacht club piano.

Ken won more National Titles than most people have won hands of poker. He placed first overall at the 1977 and 1980 Windsurfer World Championships and won the pinnacle Pan Am Cup in 1981. While most sailors sort of winged it in freestyle, Winner had a routine timed and down pat. Before the start of a race, he would have his tactics and favored side all sketched, with a plan B, C and D in his back pocket – if his Speedo that fit like Mark Spitz had one – and worse, like the Eagles song, Winner was brutally Ken doll handsome. Unless you were Jim Drake, you'd know in the first ten seconds of talking to him that he was smarter than you. Even Watson wouldn't want to play Windsurfing Jeopardy with Ken.

Ken's contributions to the sport are well-recognized, a pioneer in the evolution of windsurfing equipment. His claim to crafting the first "sinker" may be disputed, but he was certainly one of the first and is strongly credited with the adjustable boom, the foot-adjustable mast track common on course racing boards, and maneuver-wise, the carving jibe (gybe). Ken also designed the Mistral Windglider and was at the forefront of kite and wing design, where he has long reigned as the head designer for North/Duotone. It's good to be a Winner. 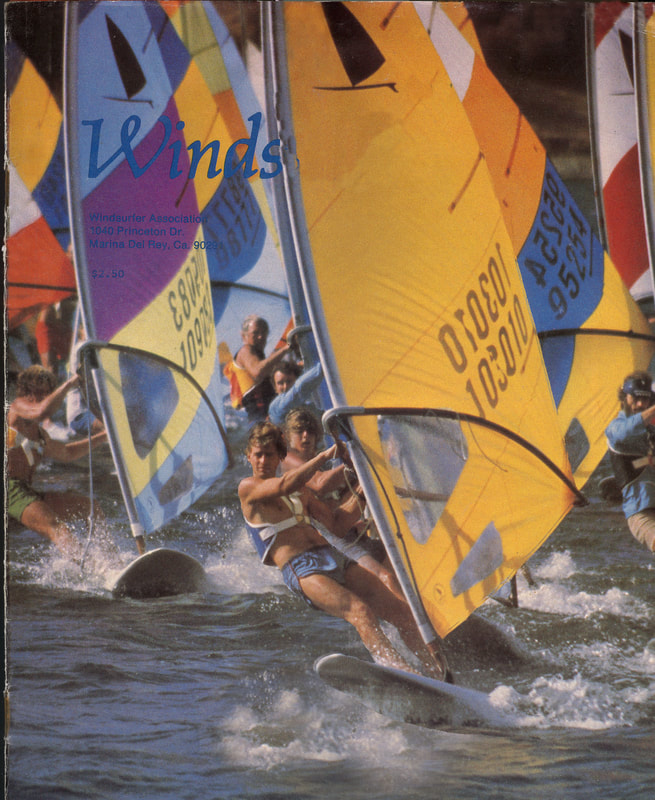 Ten seconds out of the starting block, Ken was out in front, and that would be the last you'd see of him unless he lapped you. Cal State Championships, Lake Lopez 1978. Photo Paul Kennedy
Your first windsurfing experience? "I taught myself to windsurf on the Rhode River, south of Annapolis, Maryland, on April 1, 1975. It was a sunny, 70-degree spring day with very light wind and very cold water. No wet suit, so I had to avoid falling as much as possible. I sailed around for four hours and thought afterward, "Is that all there is to it?" When I got out in stronger wind a few days later I discovered there was indeed much more too it :)."
.
Favorite minute of windsurfing? "I guess the first time I planed off with the daggerboard on my wrist was the one that hooked me most completely on the sport. I imagine the sense of speed and the sense of freedom are the sensations that hook most people."

​What would you like to be remembered for in this sport? (Did not answer, but has often said something like): "I try hard and fail a lot and sometimes don’t fail." 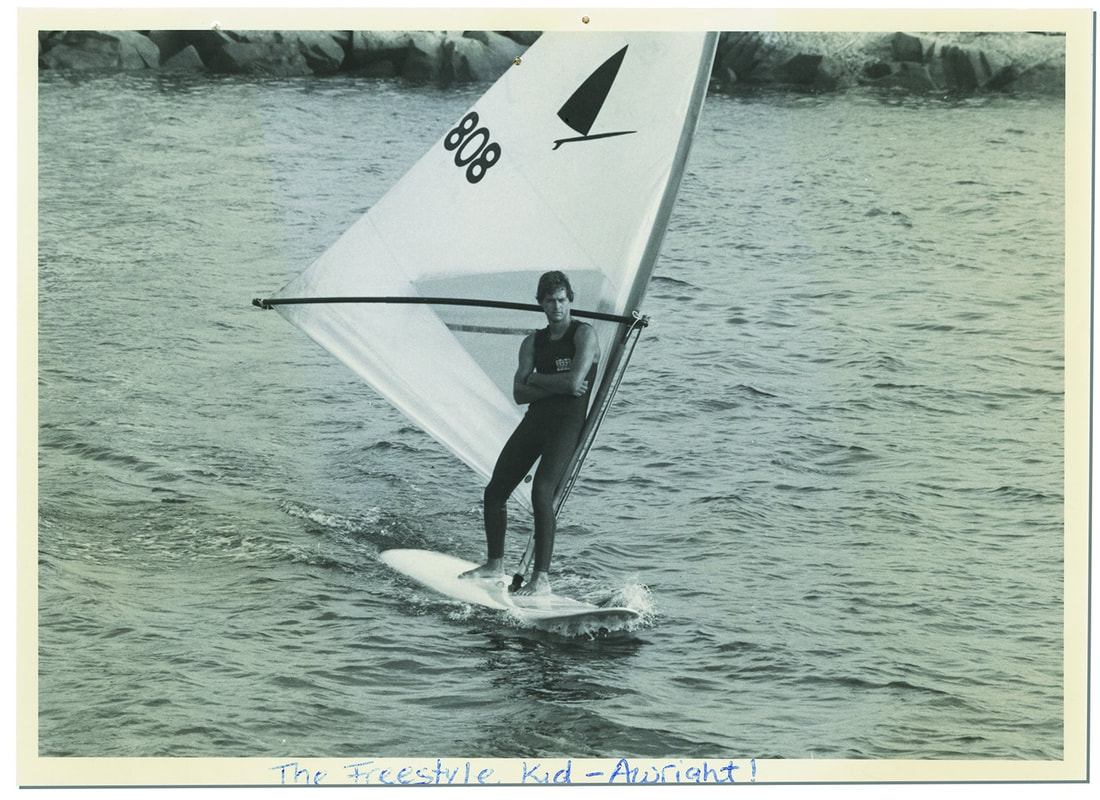 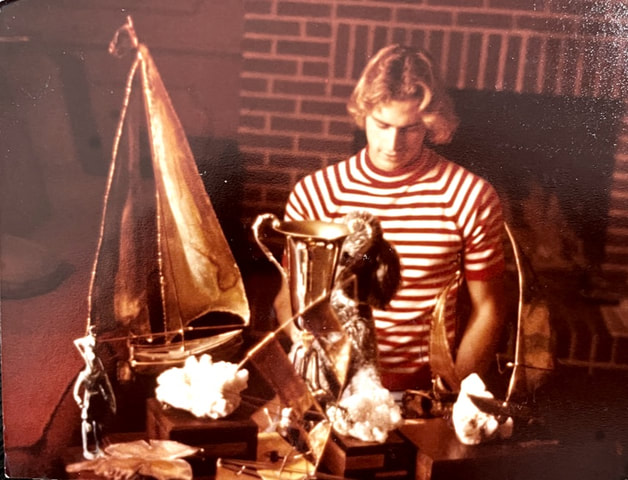 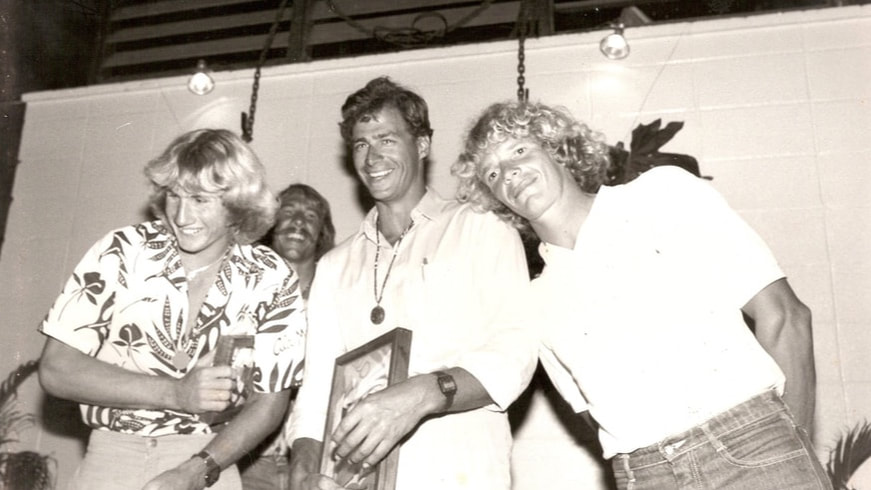 Ken on top of the world with a victory at the 1981 Pan Am Cup, with Robby Naish and Jurgen Honscheid. Photo Carol Naish 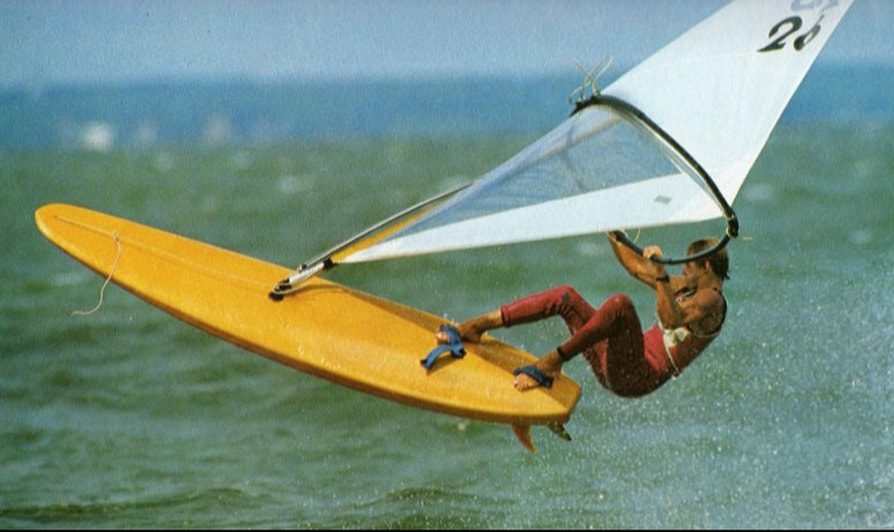 Ken was at the forefront of short board development. 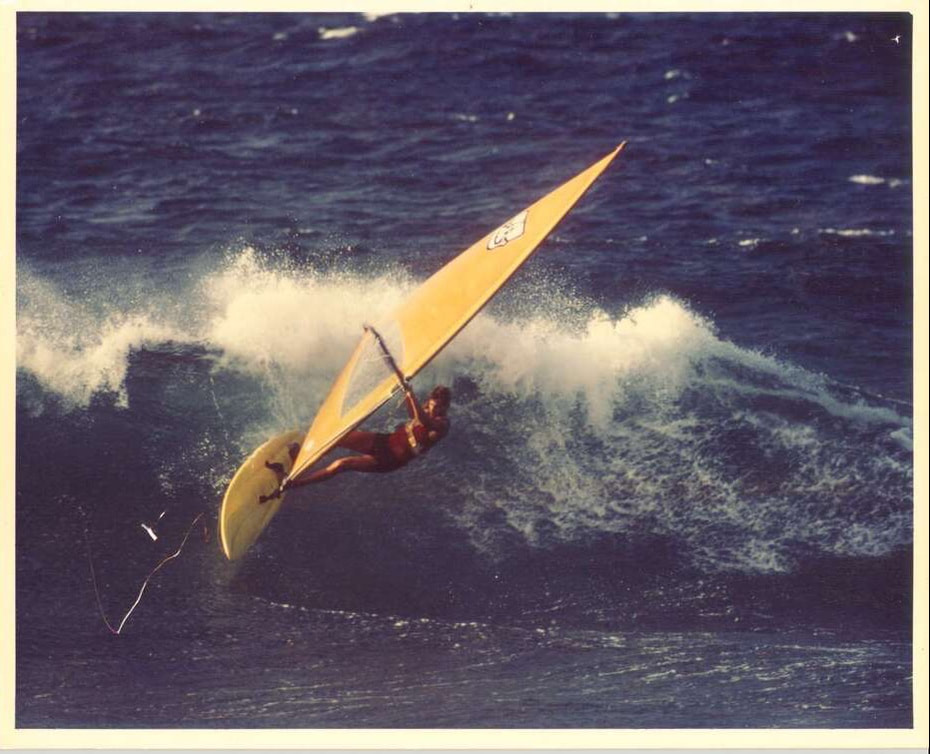 Ken testing the limits back in the day. 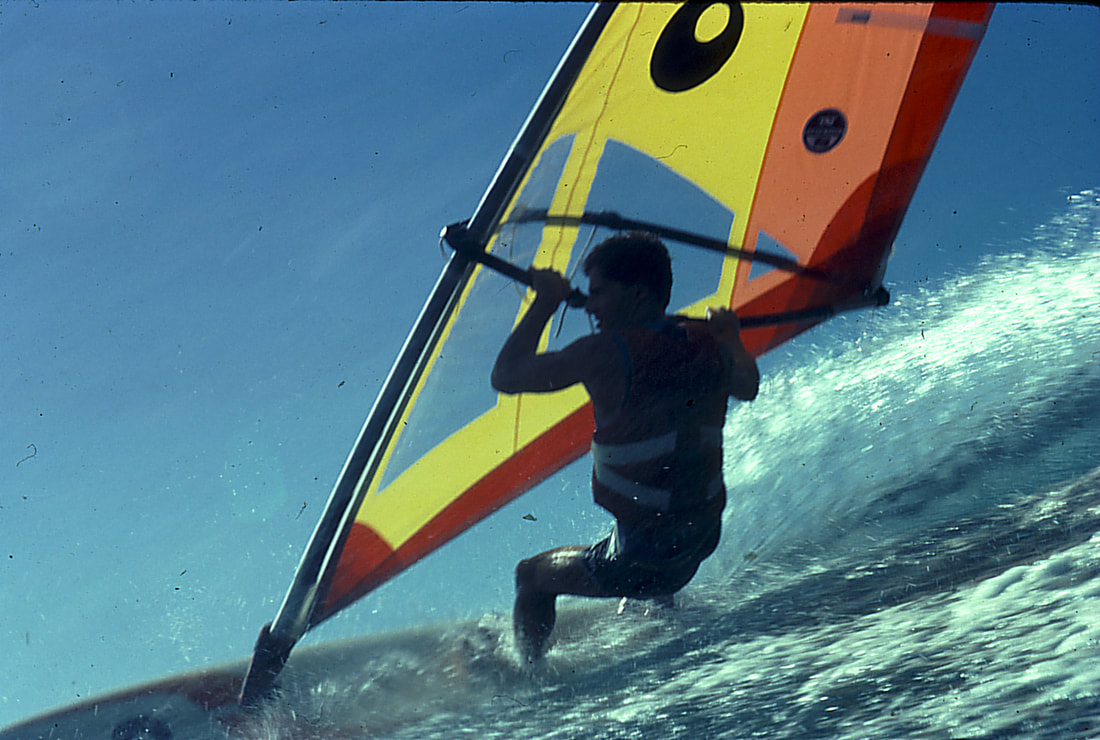 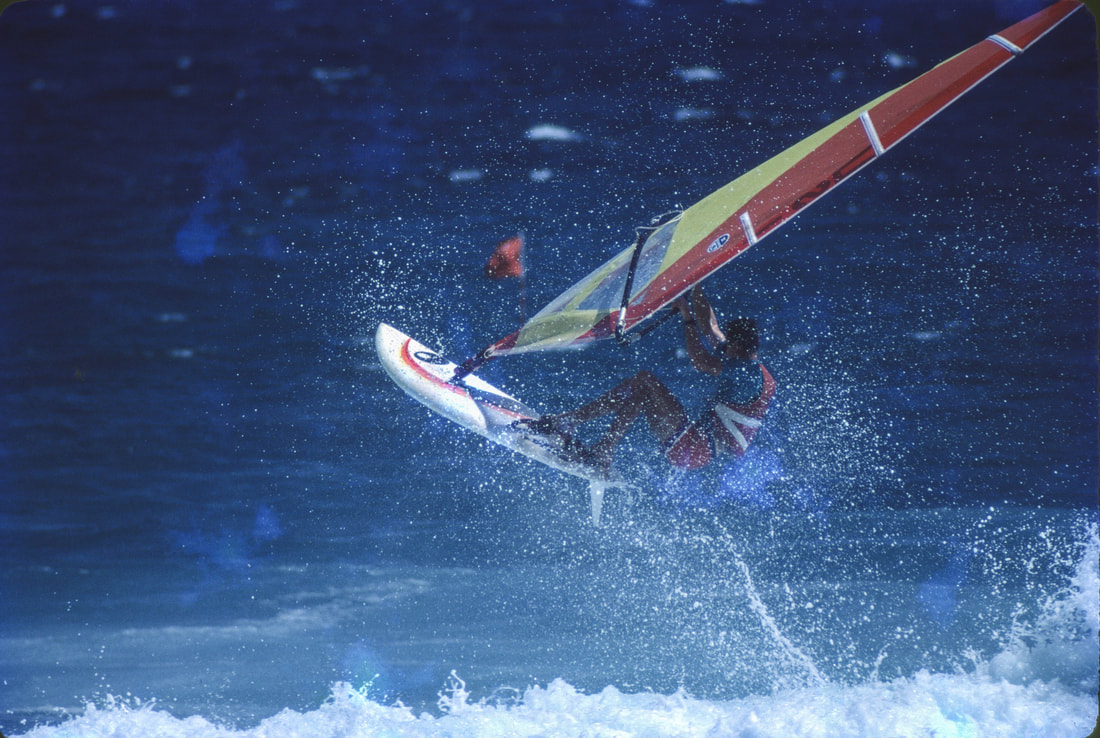 Fast in the surf slalom, the first to develop the slalom fin and co-develop Tuttle box. Photo Gordinho 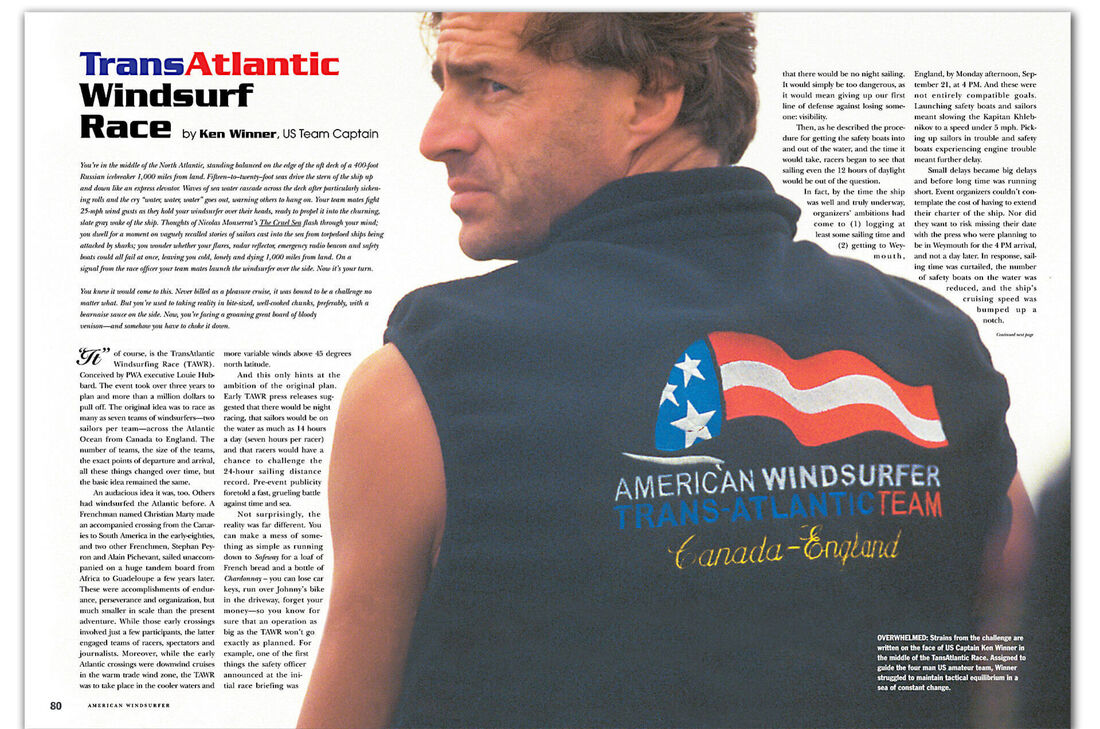 Ken showing off his writing talent with this crazy adventure. Read all about it by clicking on this image. 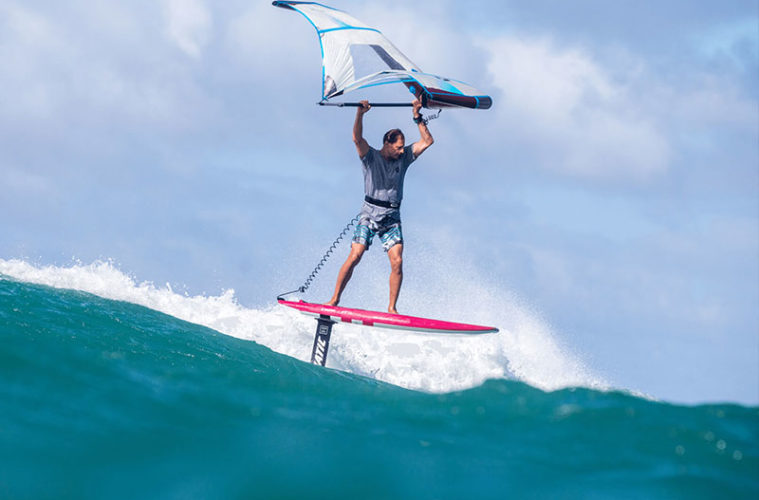 Ken was winging it long before the craze began, having a hard time convincing anyone of the value. Photo Toby Bromwich 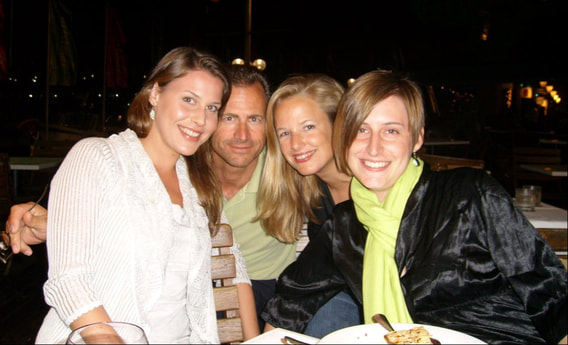 Daughters May and Laila flanking Ken and wife Julie.
BACK TO 2021 WHOF INDUCTEES